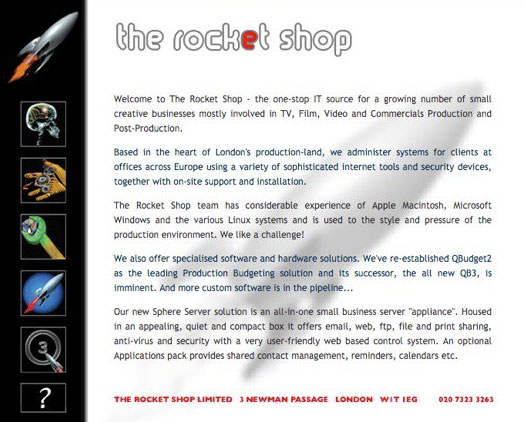 A brief history of Rocketry...

The Rocket Shop first saw the light of day over 15yrs ago as an IT solutions and front line support service firmly focussed on London's creative community, especially the burgeoning film and indie TV production sector and its supporting industries. Based in Noho/Fitzrovia the majority of our clients were 10 mins away at most in Soho, Covent Garden or around Charlotte Street. Back in those days that really mattered!

We went on to develop the Sphere Server, a highly innovative and cost-effective on-site powerhouse for workgroups and other tribes of creative collaborators, and we were the suppliers of the industry standard QBudget short film production costing and quoting tool.

Following amalgamations with two other IT companies working in the same sector, in 2009 the whole shebang became The Soho Geeks. Then from 2012 we took a step back from first call support, concentrating on server systems and related software solutions.